The future is black and white 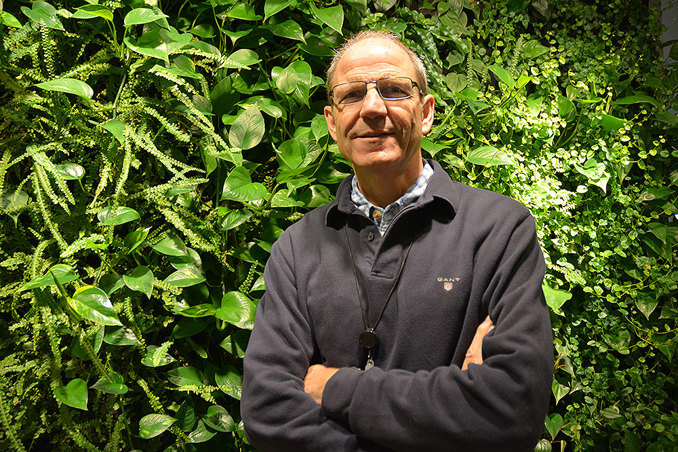 Biologist and senior environmental advisor at Statkraft, Bjørn Iuell, believes the contrast between black and white might prevent birds from flying into wind turbines. New knowledge from the Smøla wind farm will set the standard for environmentally friendly wind energy in the future.

“Why are you painting wind turbines and rotor blades at Smøla?”

“This is part of a research project where our main focus is to find out how the wind farm affects birds, and why birds are killed by wind turbines. We are painting a rotor blade and the lower section of the tower on a total of eight of the 68 wind turbines at Smøla.”

“What is the theory behind this experiment?”

“We believe more visible wind turbines and rotor blades will lead to fewer bird collisions. By painting one out of three rotor blades black, we create a greater contrast than by painting all three blades. This has to do with the optical characteristics of bird eyes and is particularly important with regard to moving objects. A rotor blade may have a speed of up to 250 km/h at the tip. We will also be painting the lower section of the turbine tower. This will make the wind turbine more visible to small birds who fly below the rotor blades.”

“Why is this experiment carried out at Smøla?”

“Bird populations at this wind farm have been carefully studied over several years by means of GPS, radar and video monitoring. There are few other places in the world where so much is known about the birds in the vicinity of a wind farm, and few places with so much intense research into bird collisions. This makes the Smøla wind farm a unique laboratory for testing out concrete collision-reducing measures that can be applied in onshore as well as offshore wind farms. The knowledge we acquire will not just benefit Smøla, but will also be important for wind power generation elsewhere in Norway and throughout the world, both onshore and offshore. For Statkraft, such knowledge is an advantage as we aim to become a leading industry player within offshore wind in the North Sea.”

“Have you encountered any challenges?”

“The project had a cumbersome start, as there were many formalities and practical matters that had to be dealt with before we could get started. From the office desk perspective it might seem an easy job to paint four rotor blades and four turbine towers, but when a rotor blade is nearly 40 metres long and your workplace will be 50 metres up in the air, the work becomes rather more demanding. On top of that, we are at the mercy of the weather to get the job done.”

“What is the key question in your project?”

“The fact that the birds can see the wind turbine and the rotor blades, does not necessarily mean they will avoid them. This is what we hope to learn more about during the three or four years that the project will last. The number of dead birds at the Smøla wind farm is fortunately low, but the low number means it will be difficult to judge the effect of our measures just by looking at changes in the death rates. Hence the project will use other methods to see whether the birds change their behaviour.”

“What methods and technologies will you use?”

“Some white-tailed eagles have already been fitted with GPS equipment that tells us in detail where and how they move; a customised radar follows all bird movements inside the wind farm; and a couple of the wind turbines have been equipped with video monitoring systems that register the movements of all birds in the vicinity of the turbine. In addition to that, we are running a parallel experiment with UV light. Together these methods should provide a good picture of any behavioural changes taking place among the birds due to the measures that we are testing.”