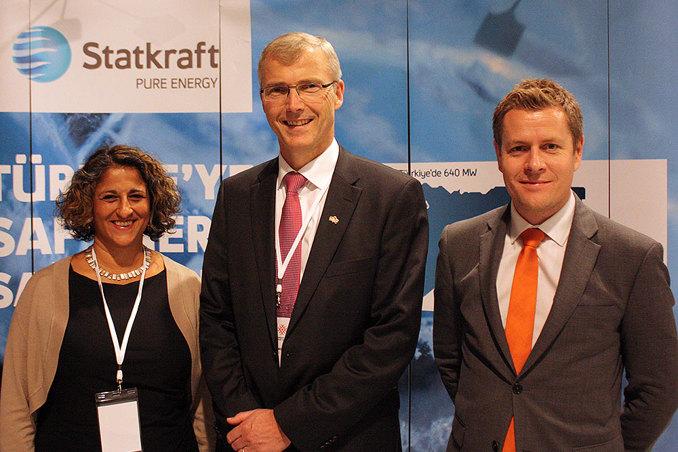 Norway and Turkey have signed a Memorandum of Understanding, paving the way for closer cooperation on renewable energy.

Bilateral talks between Norway’s Minister of Foreign Affairs, Børge Brende, and Minister of Trade and Industry, Monica Mæland, and Turkey’s Minister of Energy, Taner Yildiz, were held on Tuesday. Norway and Turkey signed a Memorandum of Understanding for the energy sector, paving the way for closer cooperation between the two countries.

“The talks between the Norwegian and Turkish government ministers were good. Both sides expressed a keen interest in strengthening cooperation between the countries in the energy sector,” says Øistein Andresen, executive vice president of Statkraft.

Statkraft currently has three hydropower projects in Turkey. The Cakit power plant opened in 2010, while Cetin and Kargi are under construction.

Turkey is Europe’s fastest-growing energy market. It is expected that Turkish energy demand will grow to 400 GWh by 2020, approx. twice current levels.

Queen Sonja of Norway opened the exhibition “Munch/Warhol and the Multiple Image” at the CerModern art museum. King Harald of Norway, the Turkish presidential couple, Minister of Foreign Affairs Børge Brende and Minister of Trade and Industry Monica Mæland were also present.

For Statkraft, the exhibition marks the end of a long journey, during which time the company has followed Edvard Munch’s art since the autumn of 2011, from Paris to Oslo via London, and now finally, Ankara. The exhibition comprises works by Munch, as well as Andy Warhol’s versions of several of Munch’s most famous pieces, such as “The Scream” and “Madonna”.

The state visit continues on Wednesday, with a seminar on renewable energy and the Turkish power market. Turkey is a very important market to Statkraft, where stable economic growth, population growth, increased energy demand and untapped hydropower resources are creating excellent growth opportunities.