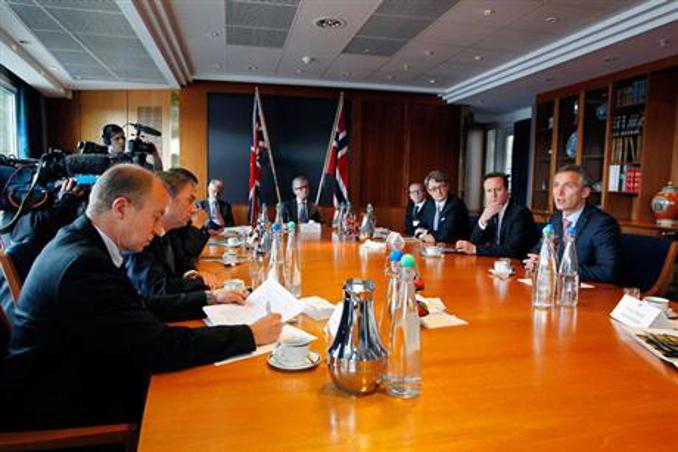 Occasioned by the new energy partnership agreement between Norway and the UK, President and CEO Christian Rynning-Tønnesen participated in discussions with the British Prime Minister David Cameron and the Norwegian Prime Minister Jens Stoltenberg in Oslo on Thursday morning.

Energy is an important part of the overall cooperation between the two countries, and the two prime ministers had therefore invited the heads of Norway’s key companies in the energy industry as well as representatives of several British companies to discuss future developments in this sector. Stoltenberg and Cameron also presented an energy partnership agreement which comprises increased cooperation within oil, gas and renewable energy.

“With its statutory targets of CO2-free electricity supply, the UK has taken the lead in the work to combat climate changes,” says CEO Christian Rynning-Tønnesen.

“This is a great foundation for energy generation from offshore wind and other renewable resources.”

Statkraft is, in cooperation with Statoil, building the Sheringham Shoal offshore wind farm off the coast of Northern England. This wind farm will consist of 88 wind turbines which together will generate enough power to cover the needs of 220 000 British households.

Statkraft is also one of four companies licensed to develop offshore wind on Dogger Bank, a project estimated to become 30 times larger than Sheringham Shoal. One of the messages which the Statkraft CEO had for the meeting with the British prime minister was that such renewable energy projects can only be realised with predictable and stable framework conditions.

“Statkraft is now in the final construction phase on Sheringham Shoal and is looking for another offshore wind project that can be developed prior to any development and participation on Dogger Bank. It would be good to have such a project in the UK,” says Rynning-Tønnesen.
“We see the importance of openness and long-term predictability concerning future framework conditions, and we see that the British listen to the views of the industry. It is important to avoid uncertainty concerning support schemes and market mechanisms before we make investment decisions worth tens of billions of kroner,” he emphasises.

Another topic at the meeting was Norway’s potential for being a renewable battery for Europe on account of its substantial hydropower capacity. When there is no wind and the sun is not shining, the production of these renewable sources are low, and at such times Norwegian hydropower can play a key role in supplying energy to countries such as the UK. For that to happen, one of the prerequisites is the construction of a planned subsea cable that connects the Norwegian and the British power grids.

In addition to Statkraft’s CEO, other participants in the meeting were CEO Helge Lund in Statoil, the chairman of Gassco, Ottar Rekdal, and CEO Auke Lont in Statnett.