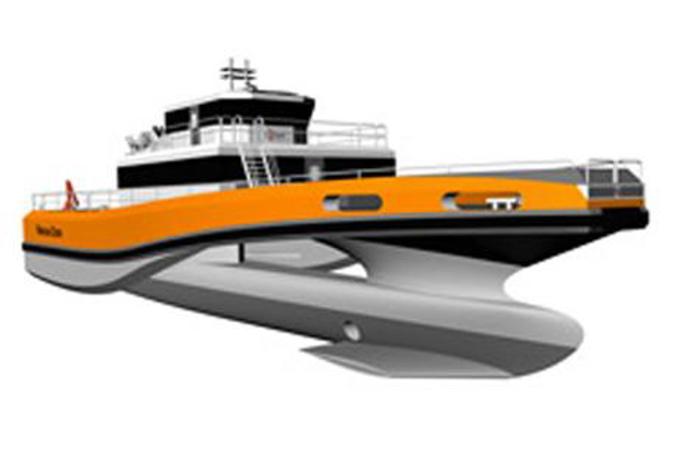 A boat with suspension, a giant robotic arm and a vessel resembling a seahorse are just three of the innovative concepts shortlisted by the Carbon Trust as part of a competition to solve the problem of transferring engineers and equipment safely on to wind turbines as far as 300km offshore in wave heights up to around three metres. The project aims to improve the economics of offshore wind by keeping turbines generating electricity in the harshest sea conditions to increase revenues by as much as £3bn for the next generation of the UK’s offshore wind farms.

Through its Offshore Wind Accelerator programme, the Carbon Trust is leading an industry collaboration of eight UK wind farm developers - E.ON, DONG Energy, Mainstream Renewable Power, RWE Innogy, ScottishPower Renewables, SSE Renewables, Statkraft and Statoil – to dramatically reduce the costs of offshore wind.
A technically rigorous process was used by the co-funded industry collaboration to select 13 designs from 450 submissions. The technical merit of these 13 concepts suggests they have the best chances of successfully driving down cost.

“The major wind energy projects being planned in the UK will require facilities and vessels able to handle far tougher weather conditions than what they currently do, as it will be costly and challenging to carry out operations and maintenance far off at sea. As a result, we depend on a significant leap in technology,” says Olav Hetland, Senior Vice President Offshore Wind Power in Statkraft.

Today’s offshore wind farms are typically less than 25km offshore in relatively benign sea conditions, and consist of up to 100 turbines. Maintenance is possible in boats about 90% of the time when wave heights are up to about 1.5m. The new ‘round three’ offshore wind projects will be as far as 300km offshore in rougher sea conditions, and may consist of as many as 2,500 turbines. At these sites, today’s access systems would only allow transfers about 210 days a year. The aim of the competition is to find concepts that can be commercialised to make transfers possible for a minimum of 300 days a year.

Among the 13 designs shortlisted are a giant robotic arm for transferring engineers and equipment to the turbine base; a boat that uses suspension inspired by Paris Dakar-winning rally cars to remain stable for the transfer; a ‘seahorse’ vessel consisting of a towering keel that minimises movements in the ocean swell; and a giant harbour mother ship that would act as a base for engineers for weeks on end, dispatching smaller daughter craft to access the turbines.

Technologies developed for sectors as diverse as the navy, industrial manufacturing, motorsport, diving and ship maintenance are now being adapted to the harsh conditions of the North Sea. The designers range from a university student to established offshore wind maintenance vessel operators, and come from the UK, Norway, Germany, Netherlands, Canada and Australia.

Olav Hetland, Senior Vice President Offshore Wind Power, Statkraft commented:
”As Europe’s leading generator of renewable energy, and a major investor in offshore wind power, we are pleased to see so many new ideas for improving accessibility at far offshore sites. Statkraft is committed to a long term industrial role within offshore wind power and we are keen to see further development of some of the most promising ideas.”