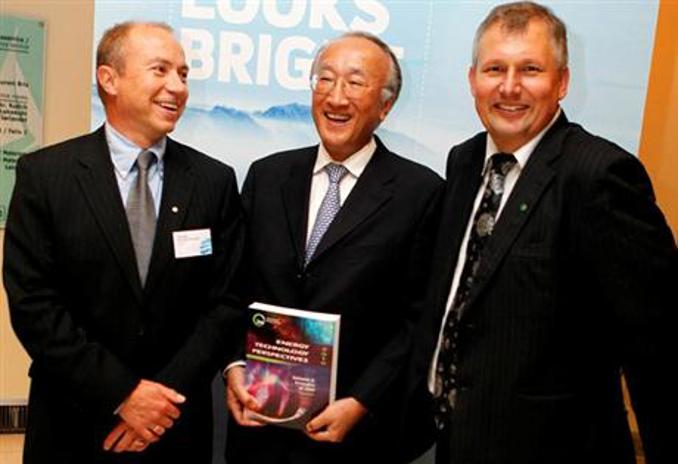 The Minister of Petroleum and Energy, Terje Riis-Johansen, and Statkraft CEO, Christian Rynning-Tønnesen, hosted the Norwegian launch of the Energy Technology Perspectives 2010 report, showing scenarios and strategies for how the energy sector can meet the challenges posed by greenhouse gas emissions and energy supply reliability.

The IEA (International Energy Agency) report Energy Technology Perspectives 2010 (ETP 2010) was presented in central Oslo on 27 August, with Statkraft and the Ministry of Petroleum and Energy hosting the event.

IEA executive director Nobuo Tanaka participated at the launch of the biennial publication, which is the IEA’s most important together with World Energy Outlook. ETP looks at which technologies will be most important in key sectors and in various regions to halve CO2 emissions from the energy sector by 2050.

”IEA’s analyses show that an energy technology revolution is necessary to achieve the climate and energy supply reliability goals in 2050. The 2010 edition of ETP looks for signs of this development, and where they may be found,” said Tanaka.

The 2010 edition analyses which energy technologies will be the most important, what benefits and drawbacks they have and their costs, as well as regional differences. No individual technology can achieve these goals alone. By applying the analyses all the way to 2050, the report shows which measures must be taken now. In order to reduce emissions by 50 per cent by 2050, the ETP’s scenario shows that energy efficiency measures must contribute 38 per cent of the reduction, carbon capture and storage 19 per cent, renewable sources 17 per cent, modification of energy carriers 15 per cent, nuclear power 6 per cent and efficient power production methods 5 per cent. (Read the summary of ETP 2010 here: http://www.iea.org/papers/2009/ETP_2010_flyer.pdf)

In his presentation, Minister Terje Riis-Johansen emphasised the importance of Enova’s role in the field of energy efficiency, before directing his perspective towards Norwegian renewable production and future focus areas.
“Hydropower is our most important source of renewable energy, but we need other sources such as offshore wind energy, which has an enormous potential. We want to exploit this potential and offshore wind energy could be the next chapter in the history of Norwegian renewable energy. However, to realise this, we must work to reduce costs through stronger investment in research and development,” said Riis-Johansen.

CEO Christian Rynning-Tønnesen described hydropower’s potential, calling Statkraft Europe’s battery.
”There are still major unused hydropower resources: Only one third of the global potential has been developed. The opportunities lie not only in large power plants and reservoirs, but in small-scale hydropower,” said Rynning-Tønnesen.
Statkraft has major interests in offshore wind in the UK and Rynning-Tønnesen pointed out the enormous wind resources in the North Sea.
“Statkraft will be part of the development here. We see a strong need to balance fluctuations in wind power production, and this is where Norwegian hydropower reserves play an even more important role than they do at present,” said Rynning-Tønnesen.
”Our technology work will be decisive. Massive expertise and financial resources are necessary to promote the development of renewable energy. In Statkraft, we consider this to be immensely interesting, and we want to achieve a solid position in this development.”