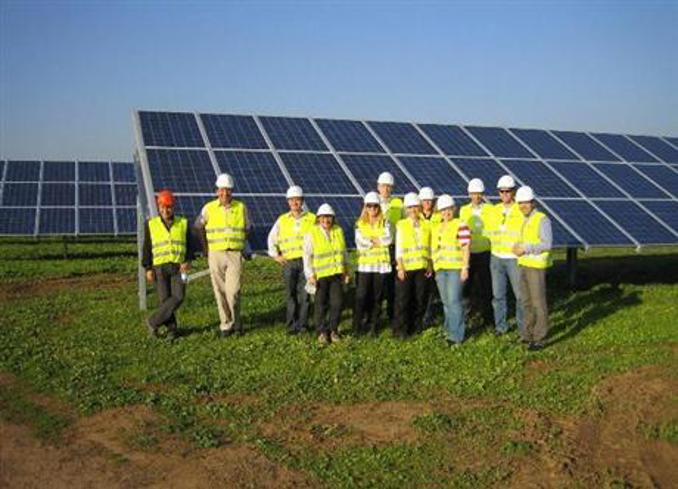 The employees are happy to see that the solar park is ready to generate renewable energy.

The park is located in Aprilia, 60 kilometres south of Rome and has an installed capacity of 3.3 MW. The park can generate 4.5 million kWh of renewable energy per year, enough to meet the energy requirements of some 1,200 Italian households. The project had a price tag of approximately NOK 120 million.

”We are pleased that the Casale project has been brought to a successful close. After a hectic autumn we managed to get everything into place within the deadline and the cost frame,” says Project Manager Kari M. Fremme, who has been in charge of the Casale solar park project, together with project owner Frederic Grosse.

The solar park comprises a total of 15,444 polycrystalline solar cell modules, installed in parallel, south-facing rows. Two converter substations convert the direct current from the panels into alternating current, before a transformer station boosts the voltage so that the electricity can be delivered to the local distribution grid.

The construction work started in July with levelling of the site and installation of the mounts for the solar panels. The first panels arrived in September and were installed in October and November. By mid-December everything had been connected, tested and was ready to supply the first kilowatts of solar energy to the grid.  The work was performed by Siemens SpA, who were responsible for the design, procurement and construction of the installation, under contract from Statkraft.